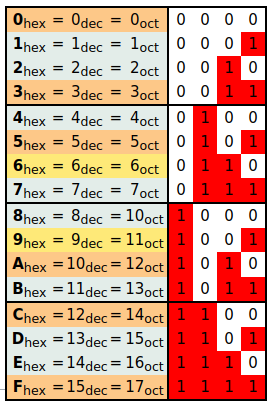 All coders or IT professionals know the term "byte". Thanks for this task, I have learnt the term "nibble".

I made an one-liner from the knowledge learnt in the recent tasks.

The "2" in %02x made an advantage on the "simplicity condition" of the task. #Edited on 7th July

For a bash version script, I made an advantage of the "simplicity condition" of the task ‐ the integers input are between 1 to 255:

I intentionally make up a sequence not on The On-Line Encyclopedia of Integer Sequences (OEIS). However, its "prototype" is on OEIS. Before I coded it, actually I took the list of numbers from the A007932 on OEIS; its title is "Numbers that contain only 1's, 2's and 3's". Then I simply used some scripts and text editor to remove terms with "11", wrote a description, and mailed this puzzle out.

This one is easier but it seems that it also receives some positive comments from team members as the puzzled Knight.

Here is the main part of my code:

Not very fancy but does its responsibility.

I have learnt the essence of the awk language and played with it on the previous two weeks (Week 117 Task 1 and Week 118 Task 1). It is specific designed for text-file operations and can handle text data by buck with simple scripting. And now shift to learn bash scripting. awk is rather advanced, or say, more modern ‐ compared with bash.

bash is rather harsh on spacing sometimes. I have to get used to its nature. As it was the first encounter with bash, I had fought with it for about 3 hours for porting the Perl codes into bash codes yesterday. For practical use, a coder or sysadmin has to remember some commons file handling parameters.

The image of the hex table is from a screenshot of the Wikipedia page 十六进制 (base 16 in zh.wikipedia.org); the image is released under Creative Commons Attribution-ShareAlike 3.0 License.